Christmas Giving is a Family Event 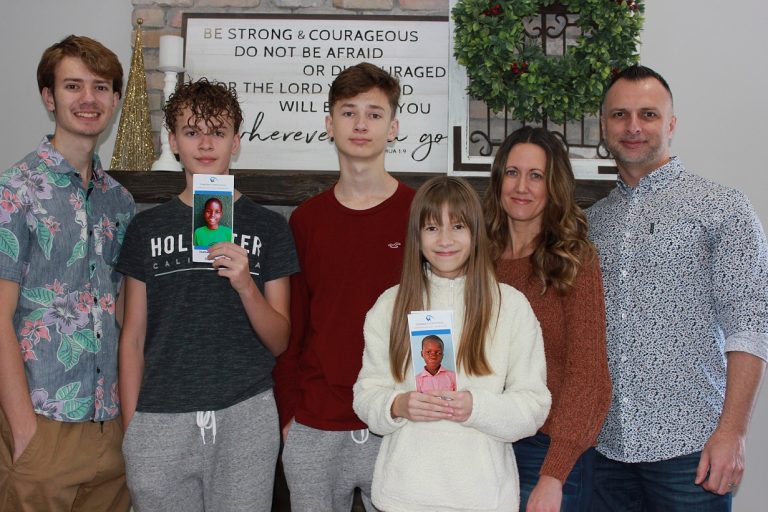 Ed and Sabrina Giesbrecht (right) of Grunthal, Manitoba, with their children, (L to R) Isaiah, Luke, Ethan, and Ella.

Ed and Sabrina Giesbrecht have been sponsoring a child since they were newlyweds more than 20 years ago, and their generosity has spilled over to their extended family who also collectively sponsor a child instead of exchanging Christmas gifts.

In 2012, Ed’s nine siblings got involved in child sponsorship through ChildCare International, when he and Sabrina suggested looking for ways to make Christmas gift-giving more meaningful.

For many years, the family had gathered at Christmas and did a $5 grab gift exchange. Ed and Sabrina realized that as his extended family continued to grow, with grandchildren and great-grandchildren, that their combined gift-giving power had grown as well.

“Those $5 gifts were substantial when we looked at how many people were involved,” Ed says. “Sabrina and I thought ‘wouldn’t it be more meaningful if we could support a ministry and help someone who couldn’t help themselves?’ You know those little trinket gifts hardly make it home from the party, so we thought ‘why not do something that can last the whole year long?’”

They pitched the idea to Ed’s siblings.

“Originally, we talked as a family about doing something more selfless, but we didn’t immediately think about child sponsorship. My sister-in-law suggested sponsoring a child but didn’t know where to start,” Ed explains, adding he and his wife immediately thought of ChildCare International because of their existing relationship with the ministry.

Those who wanted to participate could do so, and others could opt out. In the first year, they raised enough to support a sponsored child for a year, along with some extra funds for gifts from ChildCare International’s Gift Catalogue.

Now eight years into it, when Ed and Sabrina get the annual update from their sponsored child, they share the letter with their siblings. Every year, they continue to give the family the opportunity to opt in or out of contributing to the child sponsorship in lieu of Christmas gift exchanges.

“It’s such a simple thing and it has a big impact. It’s painless to do as a group, but it makes a big difference for a child somewhere,” Ed says.

“A verse that’s been near to our hearts is James 1:27 which encourages us to take care of widows and orphans, which we believe lines up very well with sponsoring a child,” Sabrina adds.

Christmas at the Giesbrecht family gathering is not entirely without presents. Ed’s mother always puts together small gift packs of cookies and candies for everyone in the family. But the family gatherings, which now include more than 70 people, are focused on sharing a wonderful big meal, playing games, and singing Christmas carols instead of opening presents.

Ed says that their family gathering could look different this year with the impact of COVID-19 restrictions, but the gift-giving is already wrapped up with their annual tradition to bless a child through ChildCare International.

“Children are an important part of this world,” Ed  Giesbrecht says. “Before we even had a family of our own, it was evident in our lives that the Lord had provided for us. We had a spurring of the Lord that it was our responsibility to give something back.”